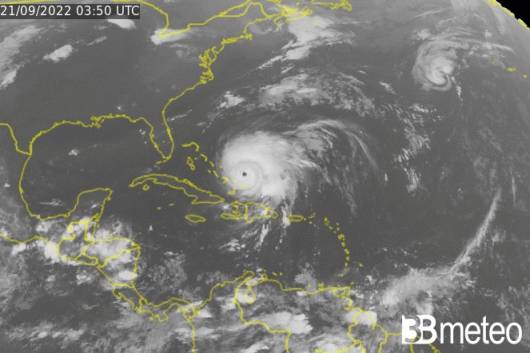 The first major hurricane of the 2022 season is taking place the last few days over the Caribbean Islands, as is the first Category 4 Hurricane of the 2022, wreaking havoc and causing 4 or more peoples their lives. Torrential rain, flooding, destruction and power outages across the islands occurred as Hurricane Fiona made a landfall.

Hurricane Fiona was borned on the 12th of September as a Tropical Disturbance in the middle of the Atlantic Ocean and started a northwestern course strengthening every day, reaching Guadeloupe on 16th of September as a Tropical Storm. As the Hurricane reached the warm Caribbean Sea it was upgraded on 18th of September to a Category 1 Hurricane as it was making a landfall over Puerto Rico. Torrential rain, strong winds and floods were unleashed in Puerto Rico where at least four people died and 80% of the island remained without power and a public health emergency was declared in the U.S. territory. The storm caused flooding with accumulation rates reaching 150 to 500 mm in Puerto Rico and the U.S. Virgin Islands, with up to 700mm over the southern and southeastern Puerto Rico. The rain was heavy as it was accompanied by sustainable winds of 140-150km/h which caused big waves and coastal flooding. The storm comes five years after Puerto Rico was ravaged by Hurricane Maria, which triggered the worst power blackout in its history and killed 3.000.

On the 19th of September Hurricane Fiona was upgraded to a Category 2 Hurricane as it was making a landfall on the Dominican Republic causing heavy rain, flash floods and coastal flooding as the sustainable winds reached 150-170km/h. The most accumulation rates were dropped in the east parts. Two deaths were reported this time with the one being an year-old girl who passed away after being struck by an electric pole felled by strong winds, while the second one is a man in the north-eastern town of Nagua was killed by a falling tree. The three eastern provinces of the Dominican Republic were declared as  disaster zones by President Luis Abinader.

On the 20th of September Hurricane Fiona was upgraded to a Category 3 Hurricane with sustainable winds of 180-200km/h, as it was making a landfall on Turks and Caicos Islands continuing a northwestern course. Residents have been ordered to take shelter as flooding was predicted, so there were no casualties or severe injuries. 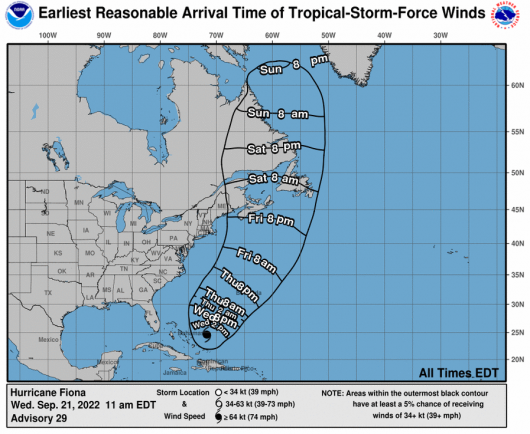 Today on the 21th of September Hurricane Fiona was upgraded to a Category 4 Hurricane with sustainable winds of 200-220km/h located east of the Bahamas. As Fiona is heading northwards it will bring severe thunderstorms across Florida and the Caribbean Islands with a continued risk of flash flooding and coastal flooding as the waves close to the center of the Hurricane are reaching even 8 to 10m. The Hurricane will head northeastwards over the next few days reaching on the 23th the Bermuda as a Category 4 Hurricane with sustainable winds of nearly 210 km/h. Between Friday 23 and Saturday 24 Fiona will travel northwards parallel to the New York. From Friday until Sunday Fiona is expected to reach the North Atlantic Ocean making an landfall across the eastern Canada with heavy rain and risk of flash flooding and coastal flooding, while Nova Scotia has the biggest threat of flooding. As Fiona will reach Nova Scotia on the 24th it will degraded to a Hurricane between Category 1 and 2 and it will still be really dangerous as it will bring strong winds and severe rain.