Severe thunderstorms will hit the USA, bringing big hail and tornado risk across the central and southern states 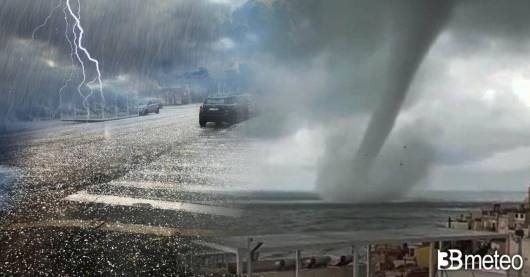 It hasn’t been 1 week since a very long and severe stormline (more than 1500 kilometers) had passed towards the central-eastern states of the USA, extending from the Great Lakes area to Texas. Strong thunderstorms had developed along the line due to the collusion of two air masses with opposite thermal characteristics, affecting the Midwest and southwards the Mississippi, Alabama and Louisiana. The storm was accompanied by destructive tornadoes which passed through much of the western states, Kansas and Nebraska, causing devastation, razing some suburbs to the ground. One tornado was classified as EF3 and hit the city of Andover in Kansas, causing disaster in the city.

A strong southwestern jet stream is bringing arctic air masses from the northwest towards the central, south and eastern states of America, leading to an increased instability as they interact with warm, humid air from the Gulf of Mexico. Severe thunderstorms are now taking place across Kansas and Oklahoma  and are going to intensify next hours to tomorrow moving southeastwards towards Missouri, Arkansas, Texas, Iowa, Illinois and western Tennessee. Possible tornadoes, large hail and damaging winds will be threats from these storms, mostly across east Texas, Oklahoma, Kansas, Missouri and Arkansas. An other line of severe thunderstorms will take place during the next hours across the eastern coast spreading heavy rain and coastal flooding.

On Friday the weather system will move fast further east, as it will be driven by very strong southwestern winds, bringing severe weather phenomena across the central-eastern and southern states of America. In more detail, hail storms with possible tornadoes can be created over Louisiana, Mississippi, Alabama, Tennessee and Kentucky. Flash flooding is possible.

On Saturday, the severe thunderstorms are expected towards the east coast with Virginia, Maryland and New Jersey be the most affected cities.

Wind gusts locally could reach 80-100 km/h or more. Accumulation rates can reach even 80-110 mm locally in Oklahoma, Texas and Kansas.